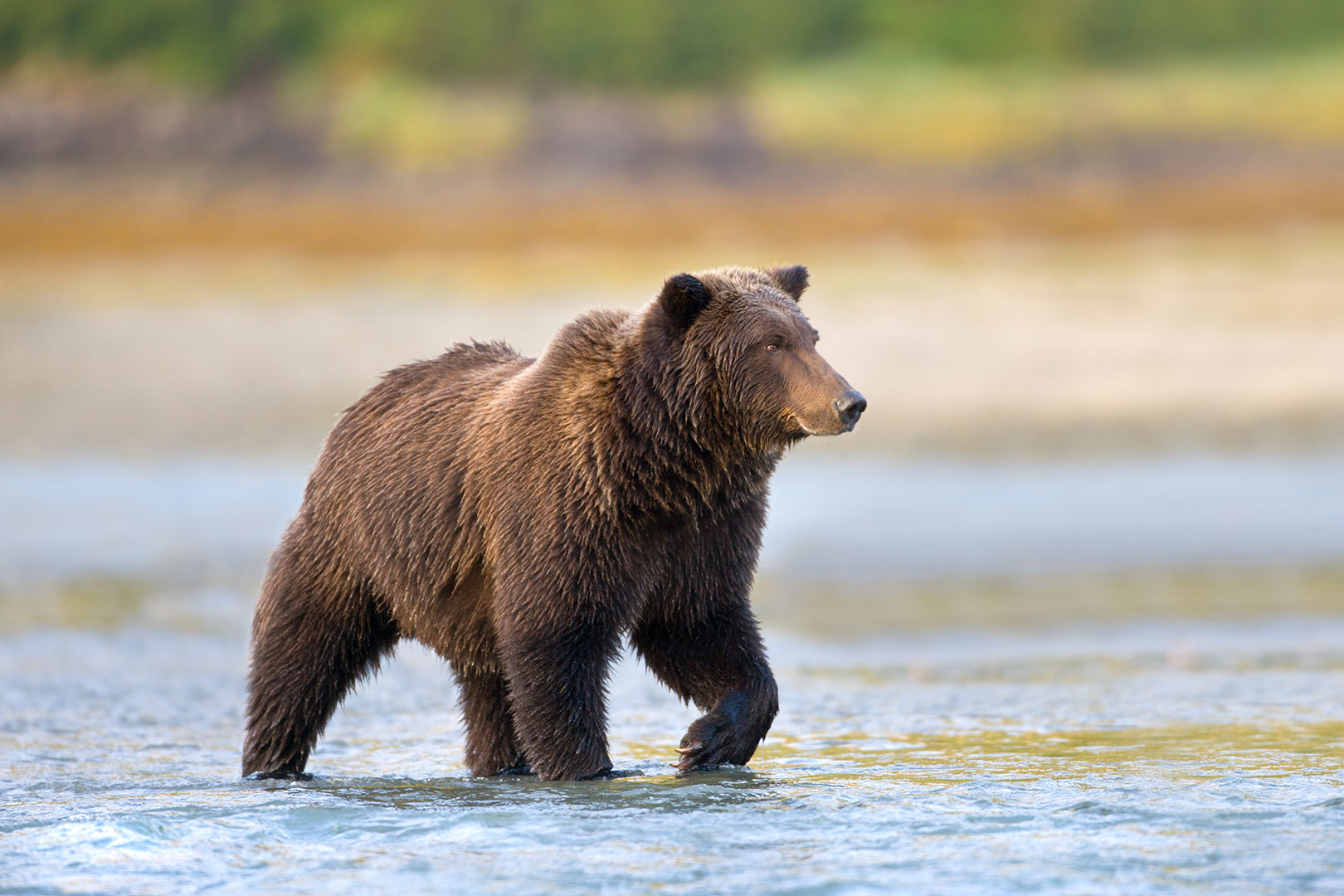 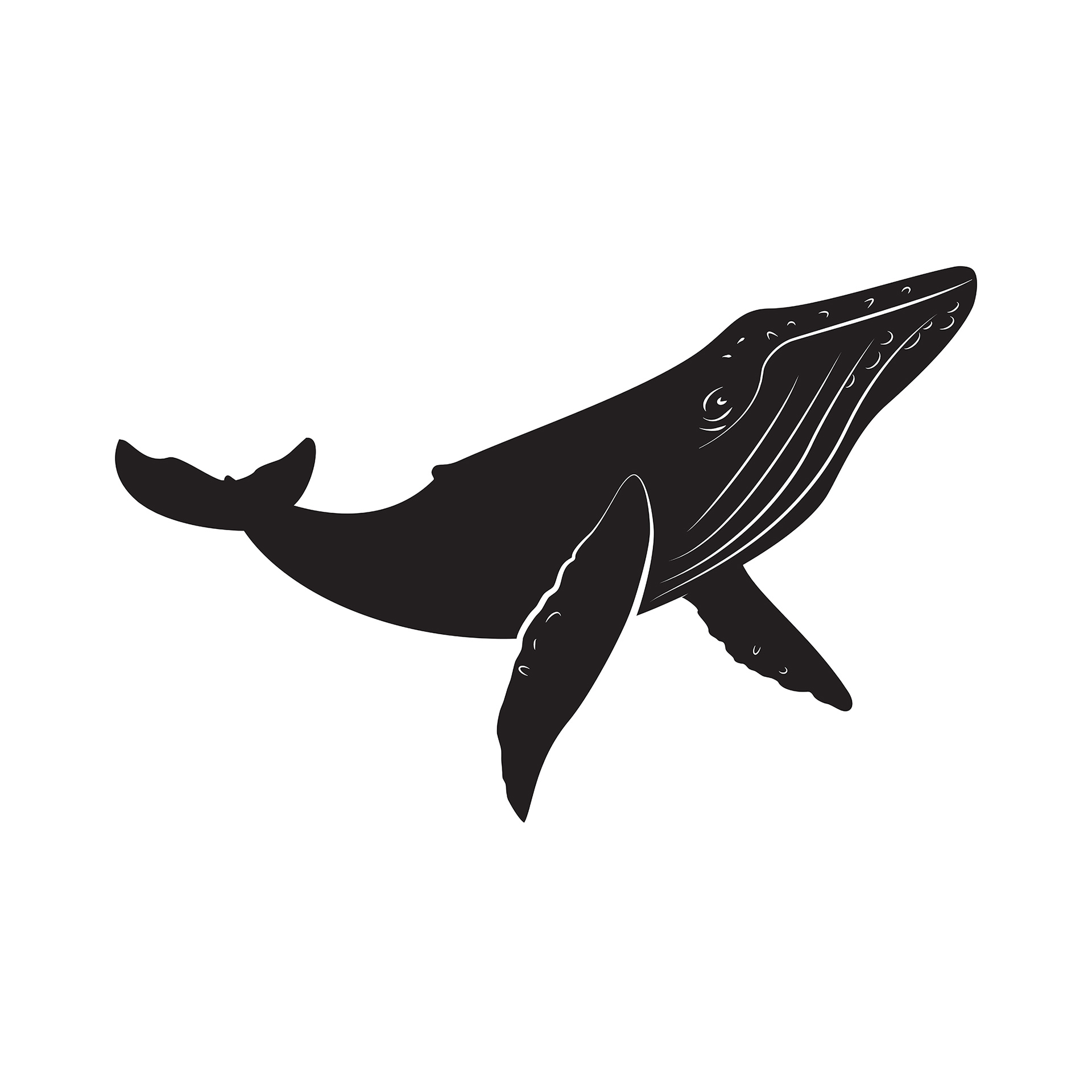 The rugged Alaska coast offers limitless opportunities for uncrowded, pristine fishing, kayaking, paddleboard adventure, and wildlife viewing. On this adventure, you'll have the opportunity to experience paddling a two-person Long Haul Mark II Kayak or a Ridewell 10'6" Inflatable Paddleboard. We'll provide two kayaks and up to four paddleboards for your group.

The 95' Glacier Bear is an outstanding platform to launch this adventure and a comfortably warm place to relax after long days in your kayak. The Crew will pamper you while the Captain maneuvers Glacier Bear to place you to perfect wildlife viewing locations. 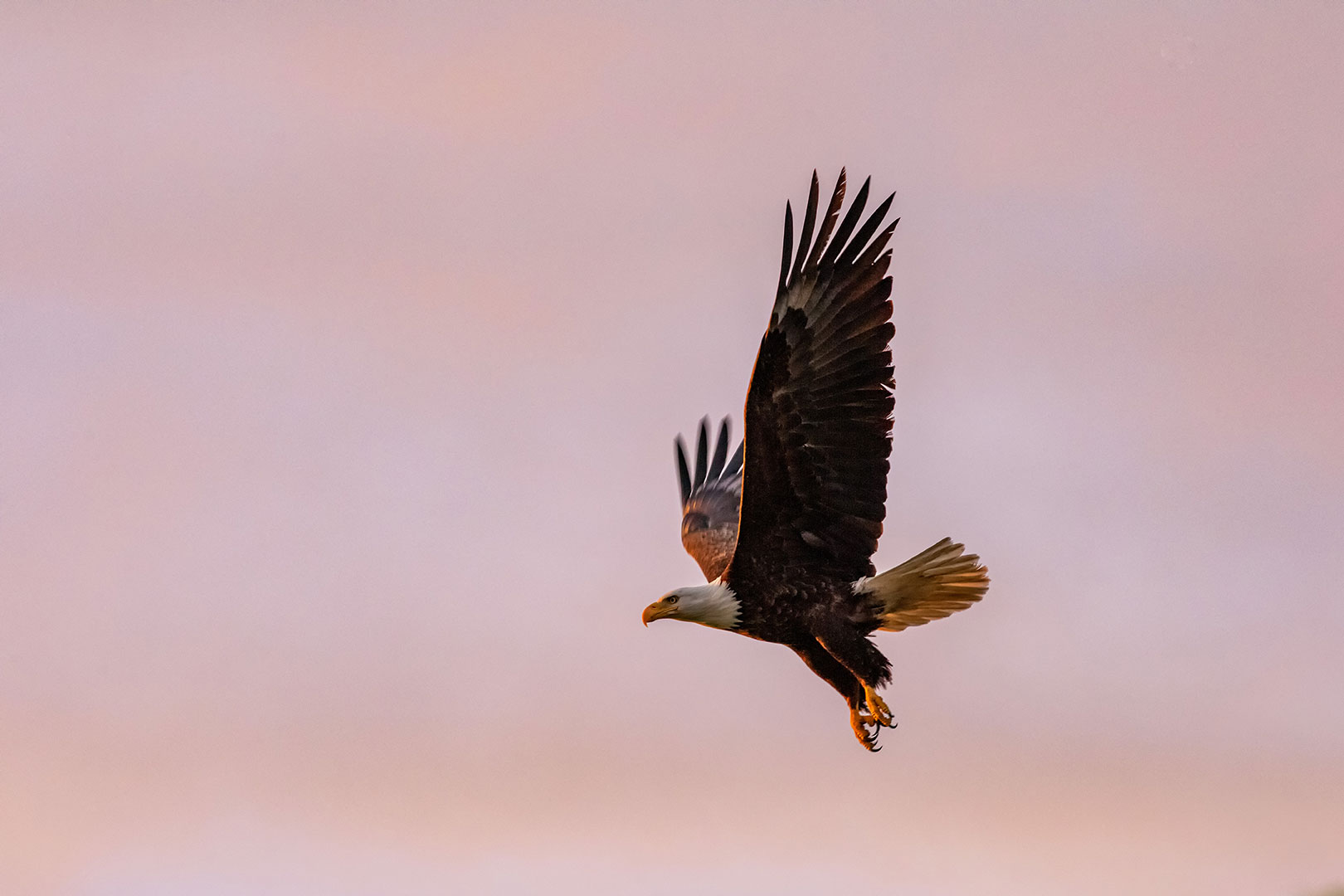 A bald eagle in flight at dawn's early light.

Alaska Wilderness Charters helps to maintain the wildness of the beaches, forests, rivers, and waterways we visit. It's our commitment to the wildlife and the land itself. This environmental responsibility drives many of our decisions as a company and dramatically influences the approach we take on our trips. 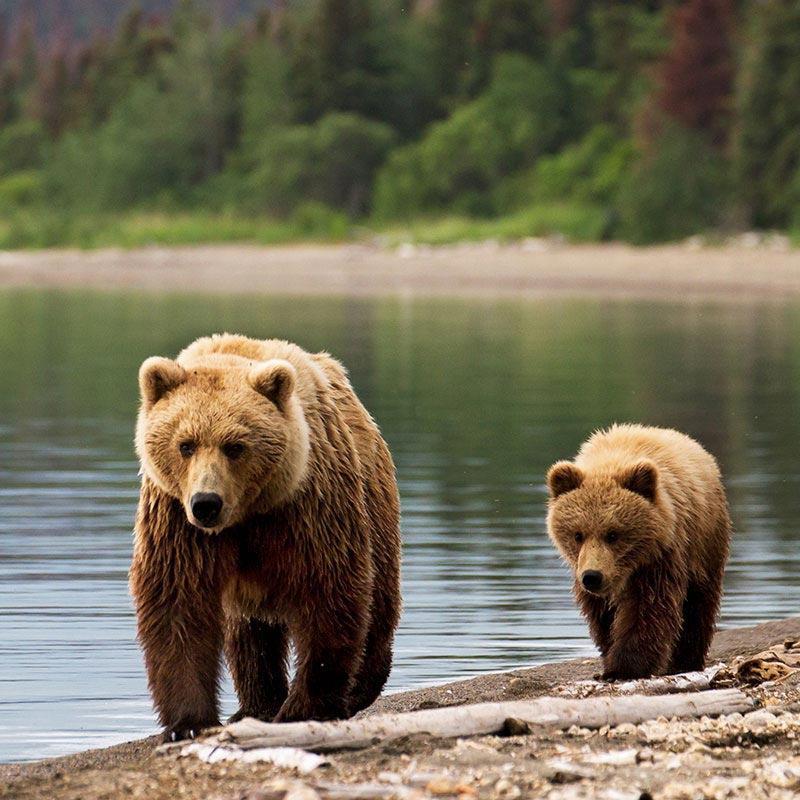 Although the name grizzly bear is sometimes used to refer to all brown bears, grizzly refers to one subspecies in the northwestern interior of North America. Members of the subspecies that range throughout coastal Alaska and western Canada are known as Alaskan bears; those on Alaska's Kodiak Archipelago are called Kodiak bears. Brown bears forage on the abundance of berries during early summer. This most dramatic of wild marine species adds an exclamation point to a rich and rewarding Alaskan adventure. The Alaskan coastal brown bear is genetically the same as a grizzly bear. Coastal brown bears grow larger than grizzlies due to the high amount of protein in their diet, primarily salmon.

The American black bear is a medium-sized bear native to North America. It is the continent's smallest and most widely distributed bear species. Black bears are omnivores, and their diets vary depending on season and location. They typically live in largely forested areas but do leave forests in search of food. Sometimes they become attracted to human communities because of the immediate availability of food. The American black bear is the world's most common bear species. 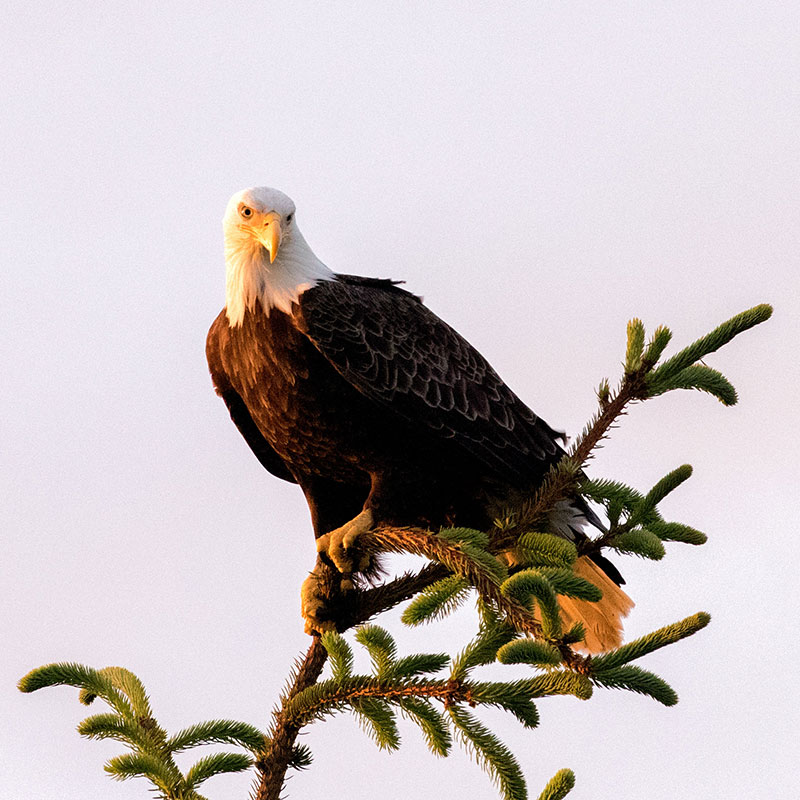 The bald eagle can be found from Alaska to Florida, with the most significant individuals coming from the northern parts of the range. After the breeding season, Alaska eagles migrate south, and many Florida eagles wander northward. The name bald, often thought to be a misnomer, does not imply a lack of feathers but is derived from an obsolete word meaning marked with white, as in piebald. Young birds of this species lack the white head and tail of the adults, which take four to five years to attain. Compared to other eagles, the bald eagle is a relatively clumsy hunter and angler and relies heavily on dead or injured fish or those that come to shallow water to spawn.

Dall's porpoise (Phocoenoides dalli) is a species of porpoise found only in the North Pacific. It came to worldwide attention in the 1970s when it was disclosed for the first time to the public that salmon fishing trawls were killing thousands of Dall's porpoises and other cetaceans each year by accidentally capturing them in their nets. Dall's porpoise is the only member of the genus Phocoenoides, and is named after American naturalist W. H. Dall.

The harbor porpoise is one of six species of porpoise. It is one of the smallest marine mammals. As its name implies, it stays close to coastal areas or river estuaries, and as such, is the most familiar porpoise to whale watchers. This porpoise often ventures up rivers and has been seen hundreds of miles from the sea.

Harbor seals have a highly developed diving metabolism that allows them to hold their breath for up to two hours. They store most of the oxygen in their blood and muscle instead of their lungs. 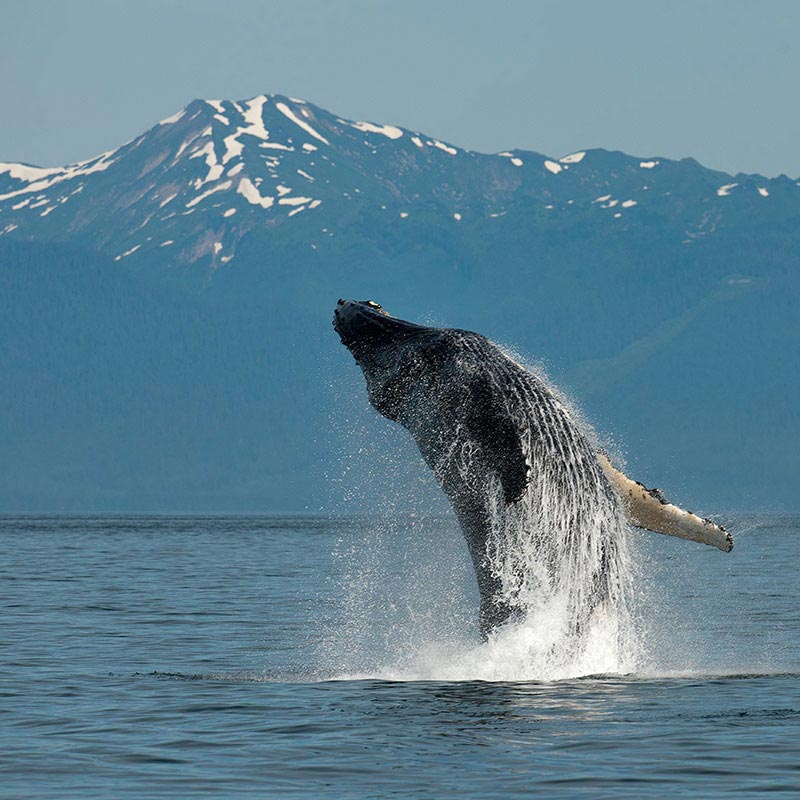 Humpback whales are highly acrobatic. They often slap their flippers and tails on the water's surface and breach, or leap out of the water. An adult humpback whale may leap completely clear of the water, then fall back in a cascade of foam. Such aerial activity occurs at all times of year but is especially prevalent in the winter mating and calving grounds. Males, females, and even young calves may engage in such displays. Whale acoustics vary depending on the whale's environment. Humpback whales make high frequency sounds that are more localized.

The moose is a member of the deer subfamily and is the largest and heaviest extant species in the deer family. Moose have broad, palmate (open-hand shaped) antlers of the males; other members of the deer family have antlers with a dendritic (twig-like) configuration. Moose typically inhabit boreal forests and temperate broadleaf and mixed forests of the Northern Hemisphere in temperate to subarctic climates. Hunting and other human activities have caused a reduction in the size of the moose's range over time. Moose live in Canada, Alaska, New England, Baltic states, and Russia. 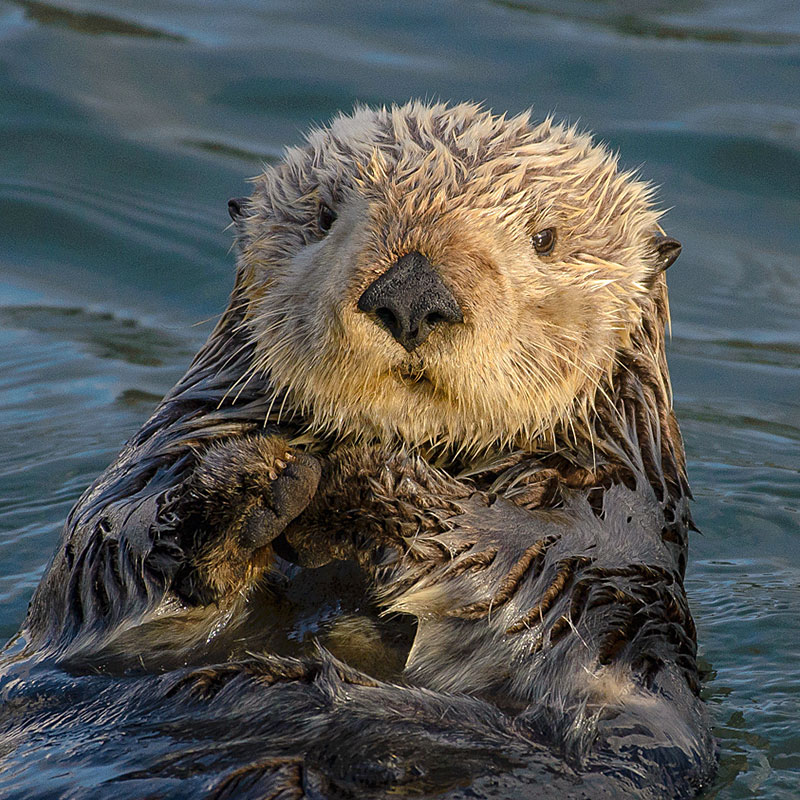 Orcas are also known as killer whales, although they are a member of the dolphin family. Fish-eating "resident orcas" and mammal-eating "transient orcas" are genetically distinct and never intermingle. Both male and female orcas (killer whales) have bold black-and-white coloring. The animals are glossy black over most of the body, with a white belly and striking white patches above the eye. The shape of a fainter grayish-white patch just behind the dorsal fin is unique to each killer whale, and scientists use this marking as one way to identify individual animals.

Sea otters feed mainly on mollusks and sea urchins, which they crush with their large, blunt teeth. Sea otters also regularly use rocks as tools to open shellfish while swimming on their backs. The female gives birth to a single offspring when she nurses while lying on her back in the water. The sea otter is the only marine mammal lacking an insulating layer of fat, which protects the animal from the frigid ocean waters. To compensate for this lack of fat, the sea otter must constantly preen its fur, keeping it meticulously clean and creating an insulating layer of air against the skin. When contaminated by oil, sea otters lose the ability to protect themselves against cold ocean waters since the oil mats the fur, preventing the insulating air space from forming. In addition, the sea otter will ingest the oil as it cleans its coat, usually causing illness and death. 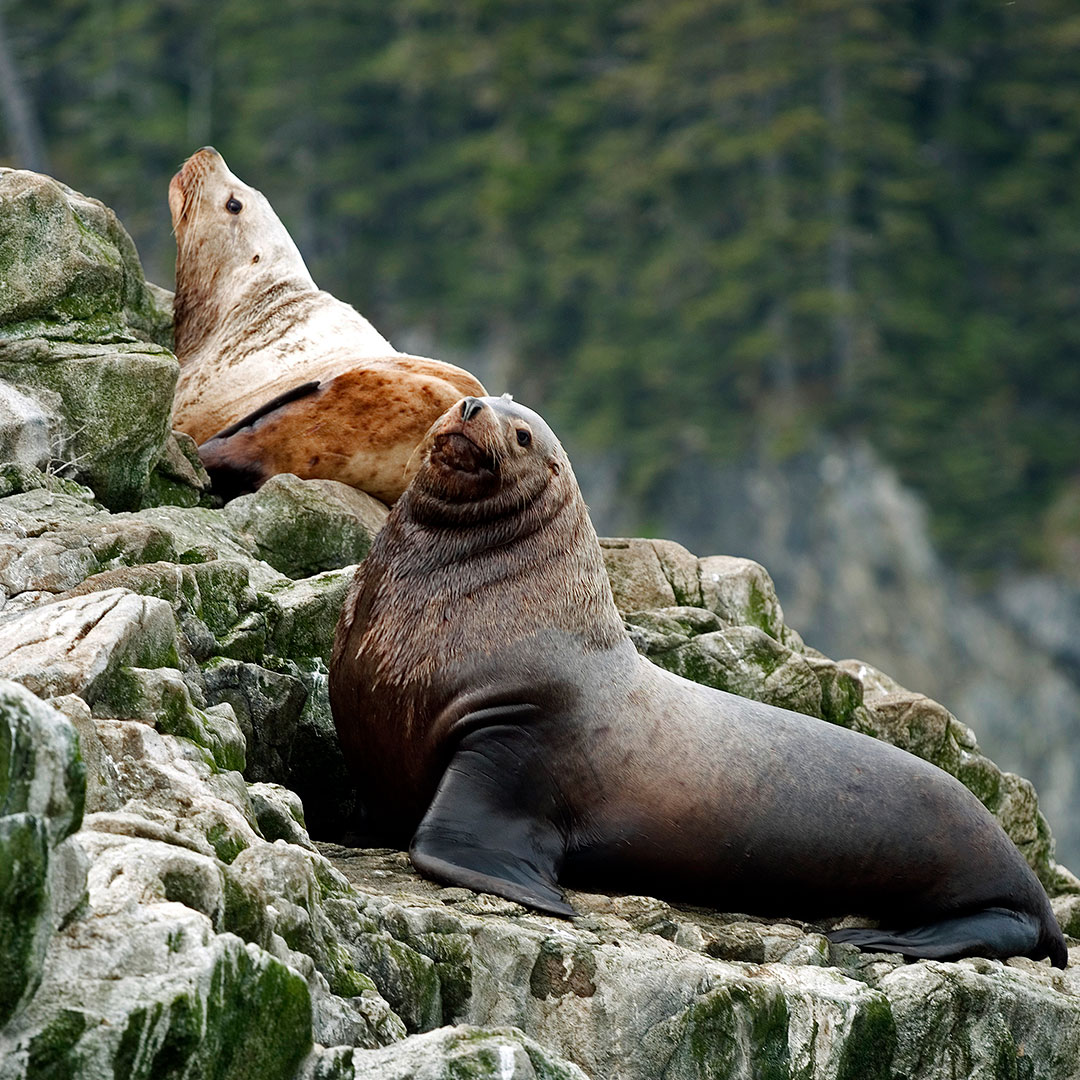 The Sitka deer or Sitka black-tailed deer is a subspecies of mule deer. Their name originates from Sitka, Alaska, and it is not to be confused with the similarly named sika deer. Sitka deer are characteristically more petite than other subspecies of mule deer. Reddish-brown in the summer, their coats darken to a gray-brown in mid-to-late August. They are good swimmers and can occasionally cross deep channels between islands.

Stellar Sea Lions are highly social animals living on rocky islets or the open seacoast. Often several hundred sea lions will take to the ocean, swimming, and diving together. Females and young pups sometimes converge in large groups to form what appear to be floating rafts. Steller's sea lions swim by using their long, broad front flippers in a powerful breaststroke. 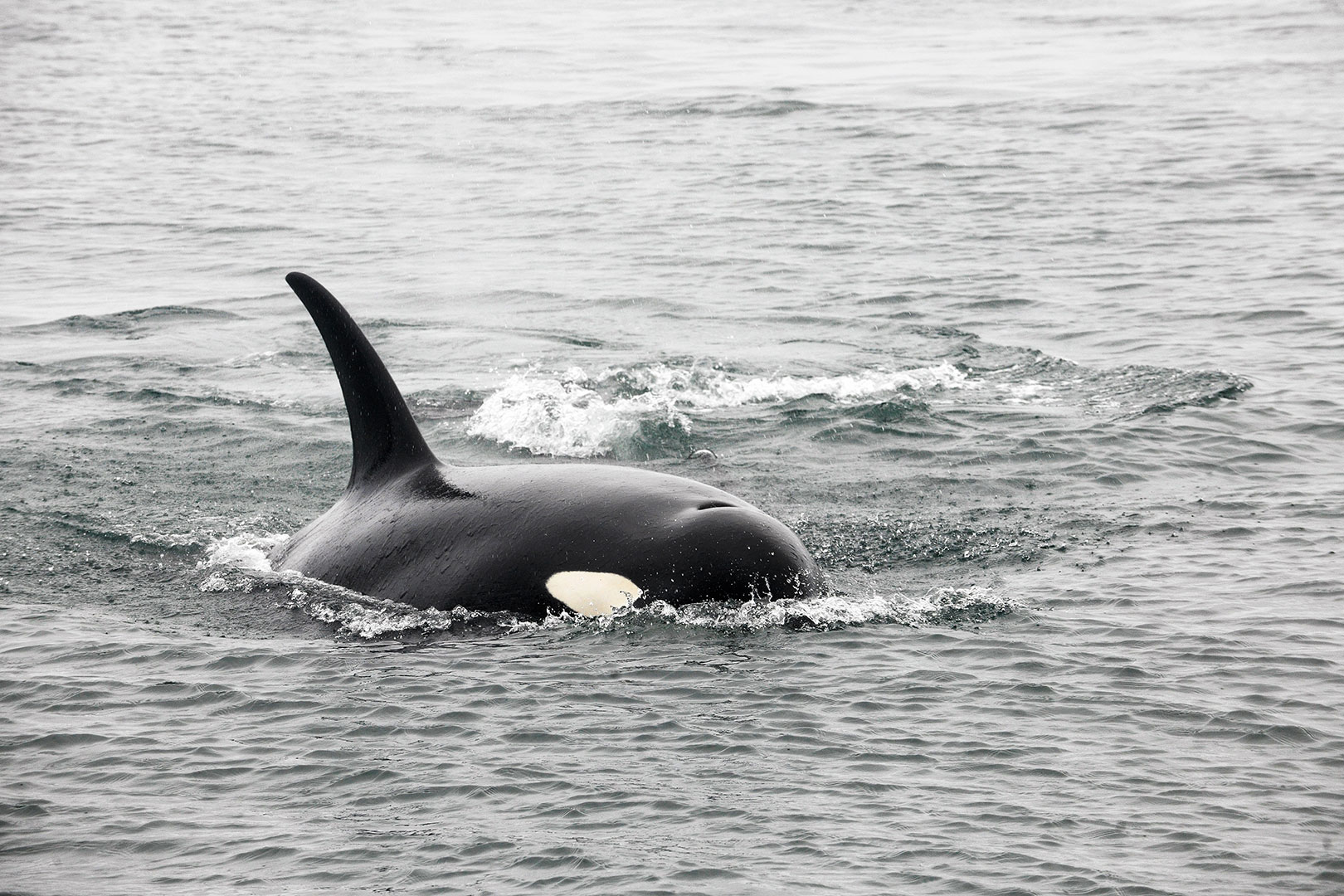 Our Guests Speak Highly Of Us! 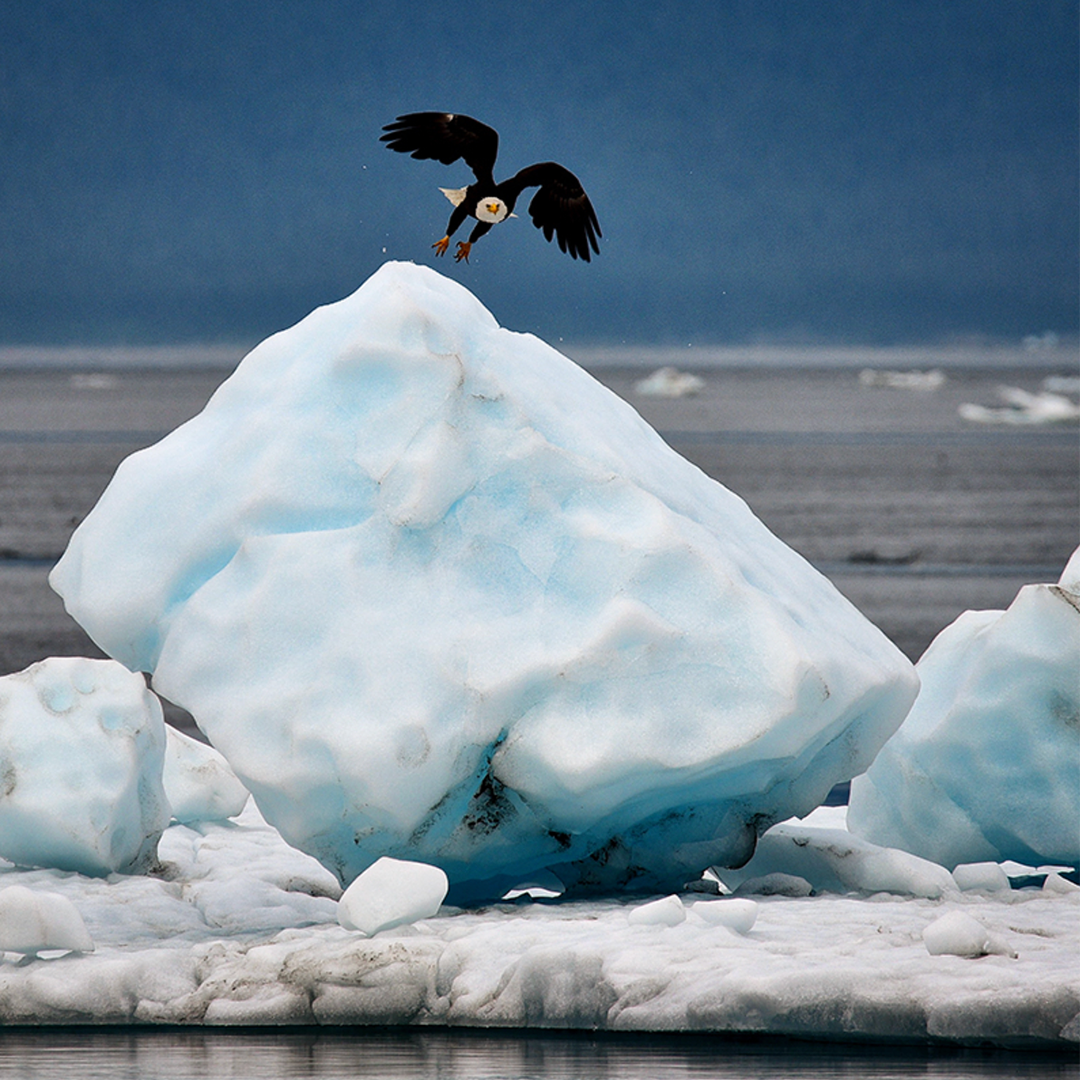 Exploring Alaska's Inside Passage by kayak and aboard the Glacier Bear was a fantastic eco-adventure! The gastronomy, flora, fauna, megafauna, migratory birds, sea of greens, wilderness, fjords, Crew and guests all contributed to heightening the experience. Moreover, I appreciated learning about the many unique ecosystems that we visited from Captain Neil, Assistant Captain Josh, Chef Katie, and John the Sharpshooter. Everyone was kind and generous with their time and knowledge. In a sentence: It is a tremendous opportunity for anyone that appreciates becoming immersed in nature, but at the same time, having all the modern-day luxuries. No doubt, I will be on another Glacier Bear voyage in years to come. 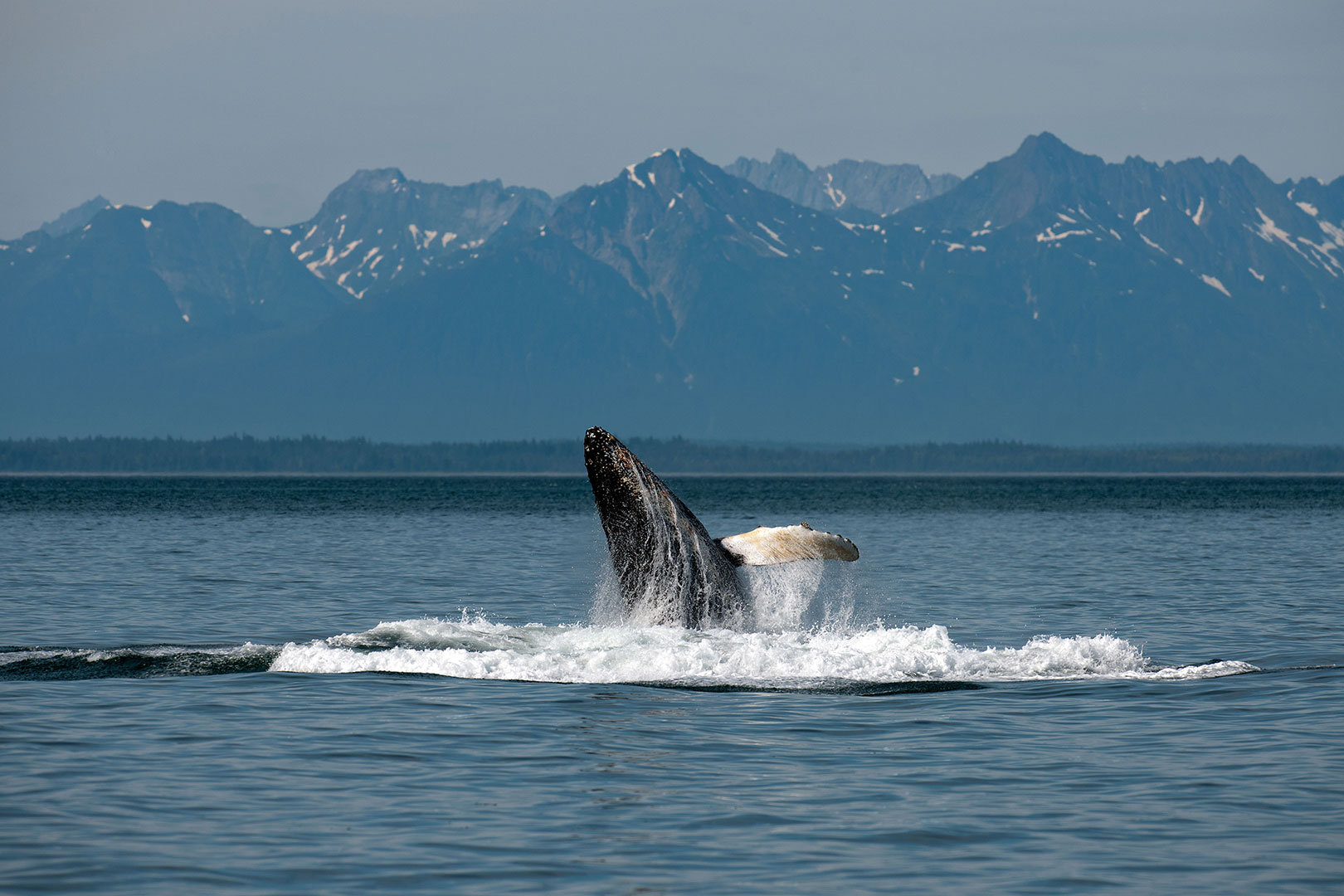 A humpback whale in the breathtaking wilderness of Southeast Alaska.