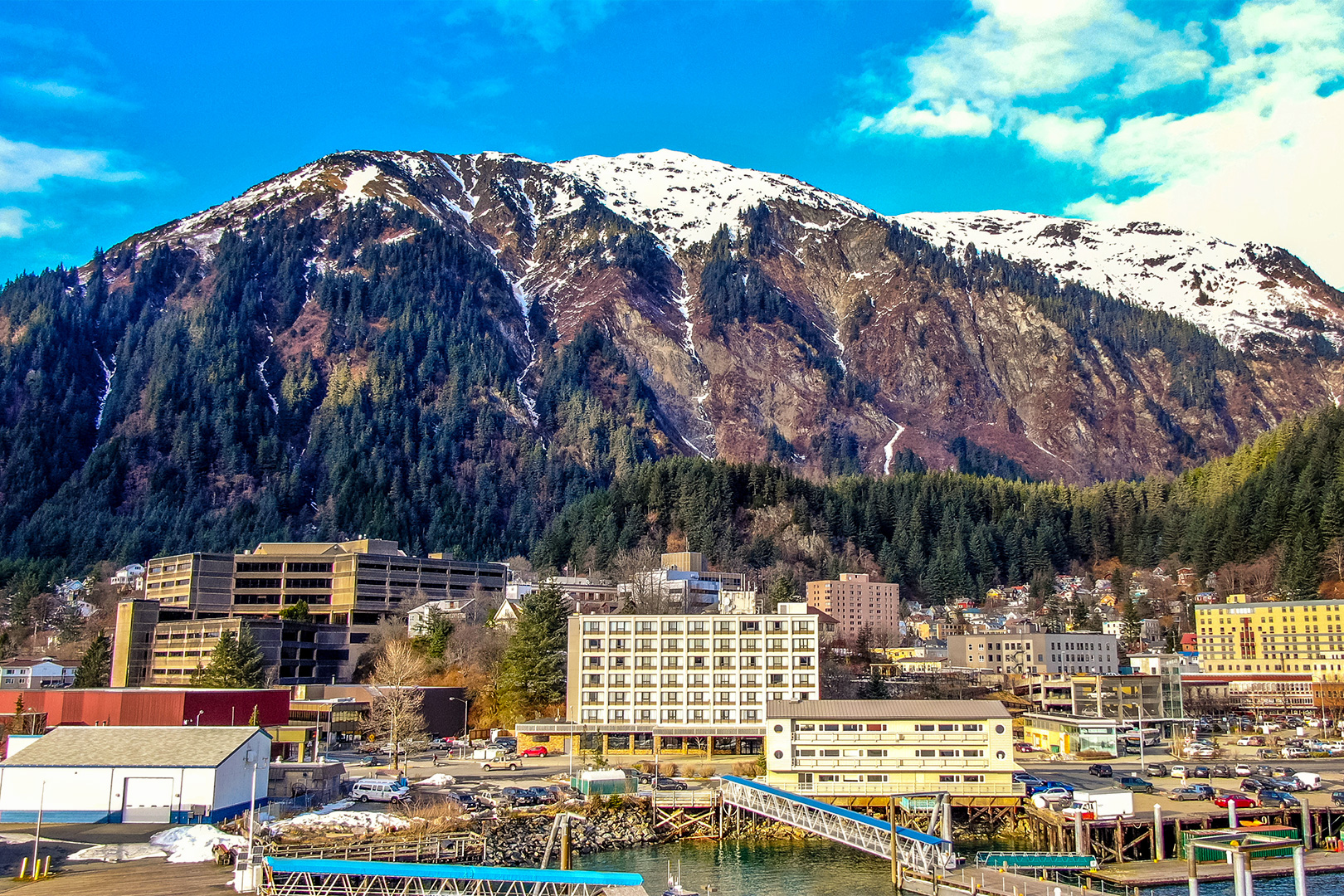 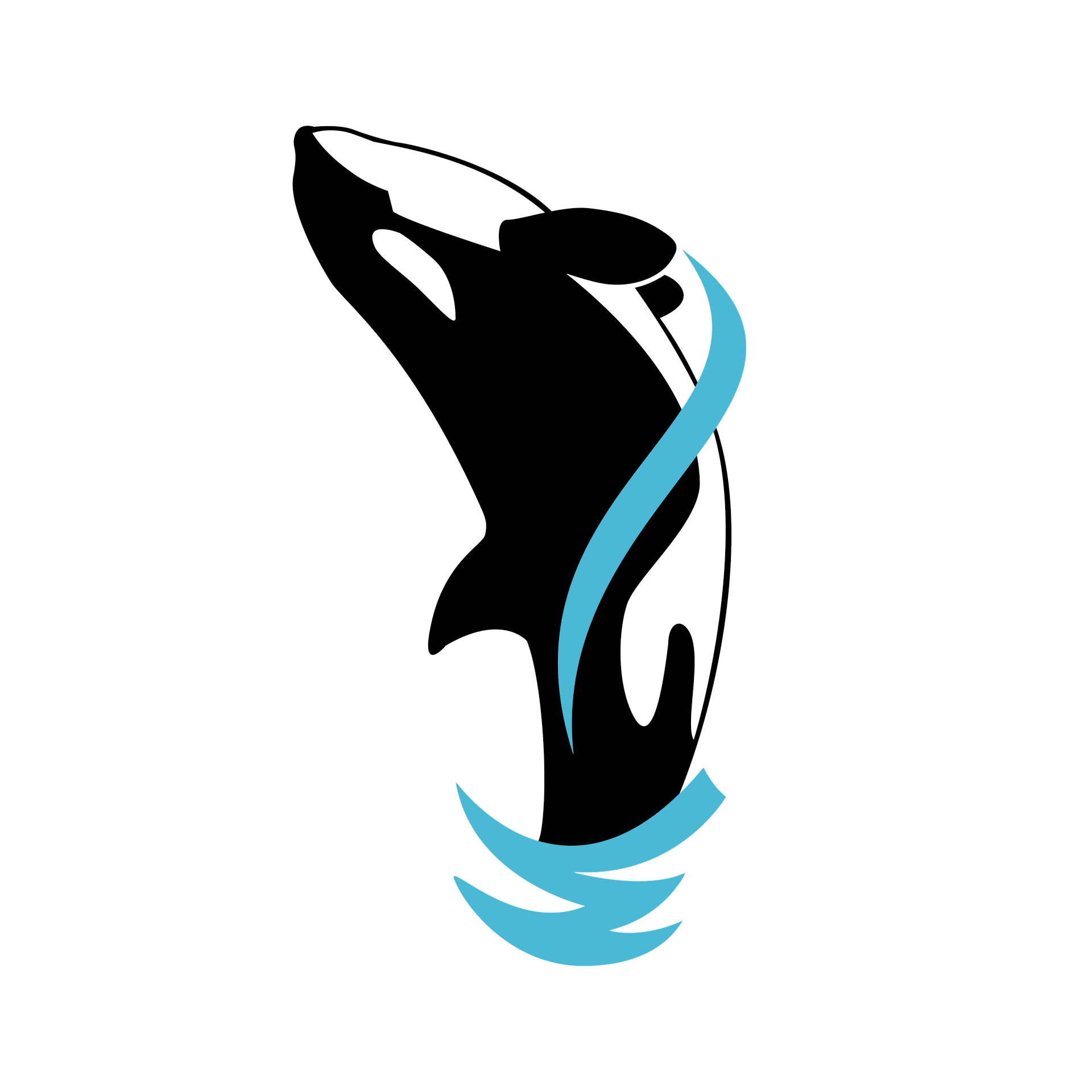 Auke Bay is an unincorporated community located in the city and borough of Juneau, Alaska that contains Auke Bay Harbor, Auke Lake, the University of Alaska Southeast, an elementary school, a church, a post office, a bar, a coffee shop, a waffle house, a thrift shop, a Thai restaurant, and one convenience store. The view of the Mendenhall Glacier behind Auke Bay and Mount McGinnis towering over Auke Lake are some of the most popular photo opportunities in Juneau.

Baranof is located within Warm Springs Bay, which is just off of Chatham Strait. About a half mile up from the settlement is Baranof Lake, a large glacially-fed freshwater lake. Baranof Lake is fed from small unnamed glacial run-off streams as well as the relatively large Baranof River. Between the half mile outlet between Baranof Lake and Warm Springs Bay there are a series of rapids and waterfalls that have proven to be lethal when run. Baranof is a very small community, having only caretakers in the winter and intermittent visitors in the summer. There are around 15 seasonal homes.

Chatham Strait is a ten-mile wide body of water that separates Admiralty Island from Baranof Island and Chichagof Island -- the three "ABC" islands (A: Admiralty, B: Baranof, C: Chichagof. It is bounded on the north by Icy Strait. 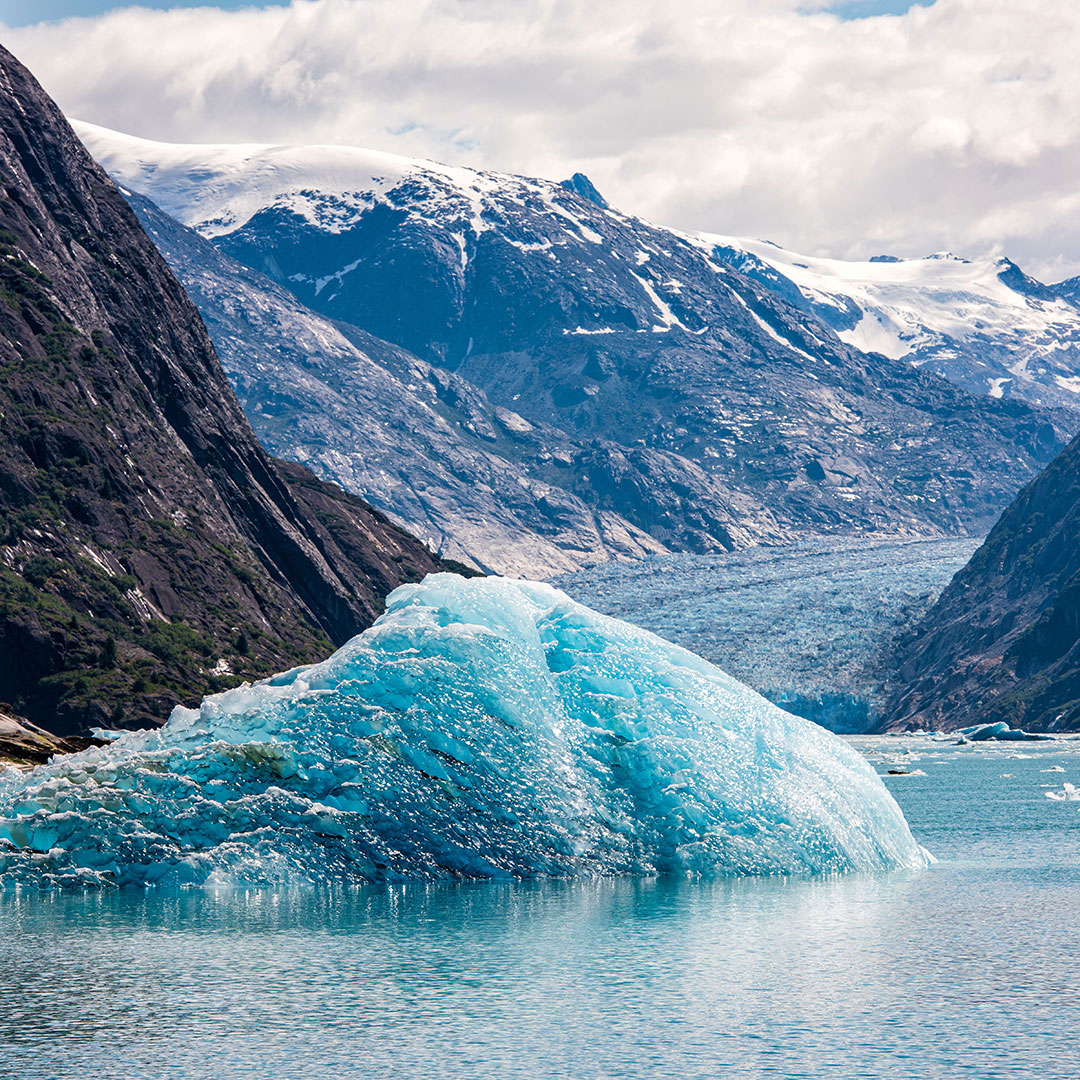 This glacier is as good as any in Southeast Alaska. A wall of ice hundred feet high and half a mile across greets the traveler. Three glaciers merge to form the Dawes Glacier. The two main glaciers are visible, and a smaller glacier adds to the flow from high on the north side, above the face. An additional glacier with an impressive icefall is in the hanging valley just before Dawes, on the north side of the fjord.

Endicott Arm features a tidewater glacier, Dawes Glacier. One is often alone in Endicott, Arm perhaps one or two other craft passing by in an all day visit. Not quite as narrow as Tracy Arm, Endicott Arm is classic fjord, particularly nearer the glacier, where the sheer granite walls soar thousands of feet above the water.

The Five Finger Islands Light is a lighthouse located on a small island that lies between Stephens Passage and Frederick Sound. It and Sentinel Island Light Station were the first U.S. government lighthouses opened in Alaska on March 21, 1902. It became the last lighthouse in Alaska to be automated on August 14, 1984. 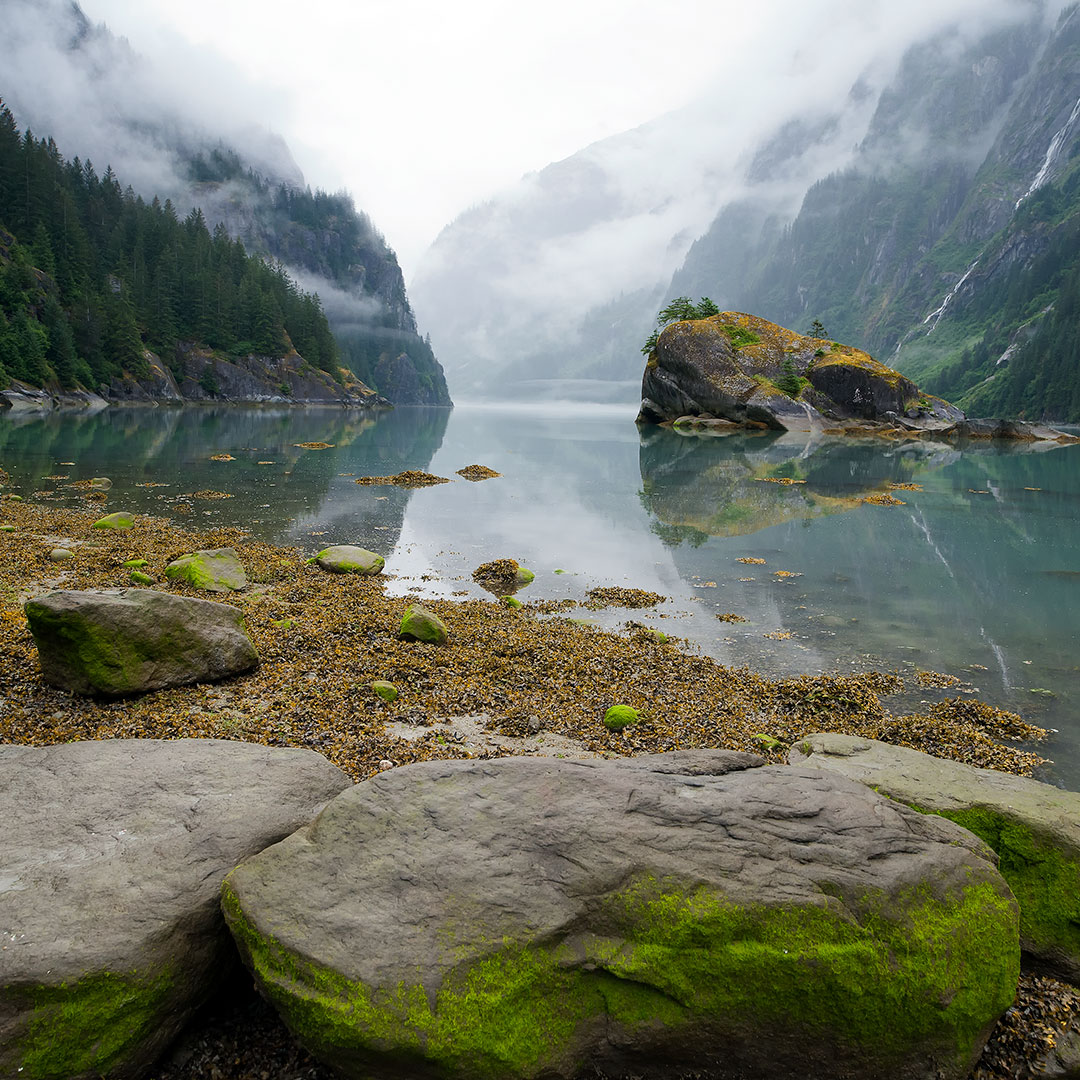 Ford's Terror is a very steep and narrow fjord 60 miles southeast of Juneau within the Tracy Arm-Ford's Terror Wilderness. It is named after a naval Crew member who, in 1889, rowed a dinghy into the narrow entrance of the fjord at slack tide and suffered six "terrifying" hours trapped in the turbulent currents. Luckily for us, tide tables and plenty of experience allow us to contemplate Ford's predicament from the safety of a nearby camp!

Reaching its beginning, we turned left into Frederick Sound, where we sailed a good part of the morning west, towards Chatham Strait, that huge north-south water avenue leading to the northern parts of Southeast Alaska. We had a special watch for marine mammals, but only saw Dall’s and harbor porpoise.

Holkham Bay (also known as Sumdum Bay) is a bay in Endicott Arm, Alaska. Gold was mined from quartz veins found in the black graphite slate. The Sumdum Mine is located 2.5 miles south of Sanford Cove. Two ledges constitute the Sumdum Chief and Bald Eagle Mines and "have been mined to a depth of several hundred feet below their surface outcrops.

The Inside Passage, a natural protected waterway in northwestern North America, is 1,500 km (950 mi) long. It extends along the coast from Seattle, Washington, to Skagway, Alaska, and is an important year-round shipping lane. The passage is made up of a series of straits sheltered from Pacific Ocean storms by Vancouver Island and other islands. Ports along the passage include Vancouver, Prince Rupert, Ketchikan, Sitka, Wrangell, Petersburg, Juneau, and Haines. 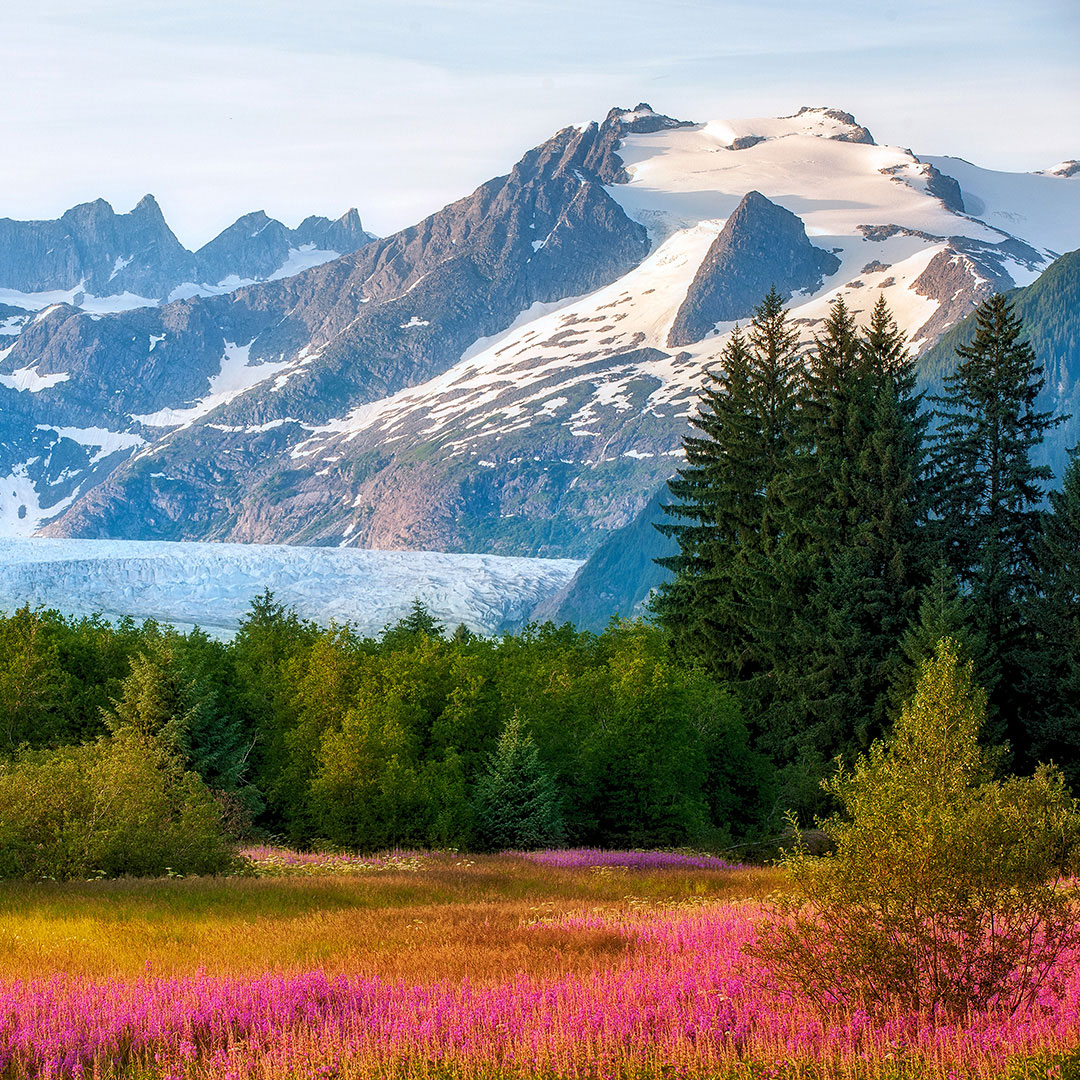 Juneau is the capital city of Alaska. In 2014, the population estimate from the United States Census Bureau was 32,406, making it the third most populous city in Alaska, after Anchorage and Fairbanks. Juneau's daily population can increase by roughly 6,000 people from visiting cruise ships between the months of May and September. The city is named after gold prospector Joe Juneau.

LeConte Bay is an 810-foot-deep, six-mile-long bay in the southeastern region of the U.S. state of Alaska, located east of Frederick Sound. LeConte Bay is a very steep-sided fjord that is home to a seal rookery and the terminus of LeConte Glacier. It was named in 1887 by U.S. Navy Lieutenant-Commander Charles M. Thomas in honor of a California biologist Joseph LeConte.

LeConte Glacier is 21-miles long, and 1-mile wide. It flows southwest to the head of LeConte Bay. Since its discovery, the glacier has retreated nearly 2.5 miles, although it is considered to be in a stable position today. The glacier is known for its "shooter" icebergs which calve off underwater, and shoot to the surface due to their buoyancy. LeConte Glacier is the southernmost tidewater glacier in the Northern Hemisphere.

Lituya Bay is located on the outer coast of Glacier Bay, and it has a major fault line through its head. Geological, and native oral history attest that about twice each century, an event has taken place that created abnormal waves within Lituya Bay. On July 10, 1958, an earthquake caused a landslide and sudden glacial surge, creating the highest tsunami ever recorded on earth. The wave that swept the nine-mile long bay sheered the trees off the nearest mountain to an elevation of 1,720 feet! This sheer line is still evident today.

The strait was named by Russians because of a fatal incident during a fur seal hunting expedition led by Alexander Baranof in 1799. Baranof employed Native Aleut hunters, and ate poisonous shellfish from the strait, which resulted in approximately one hundred and fifty deaths. Beyond the strait are the points Poison Cove and Deadman's Reach, also named for the incident. 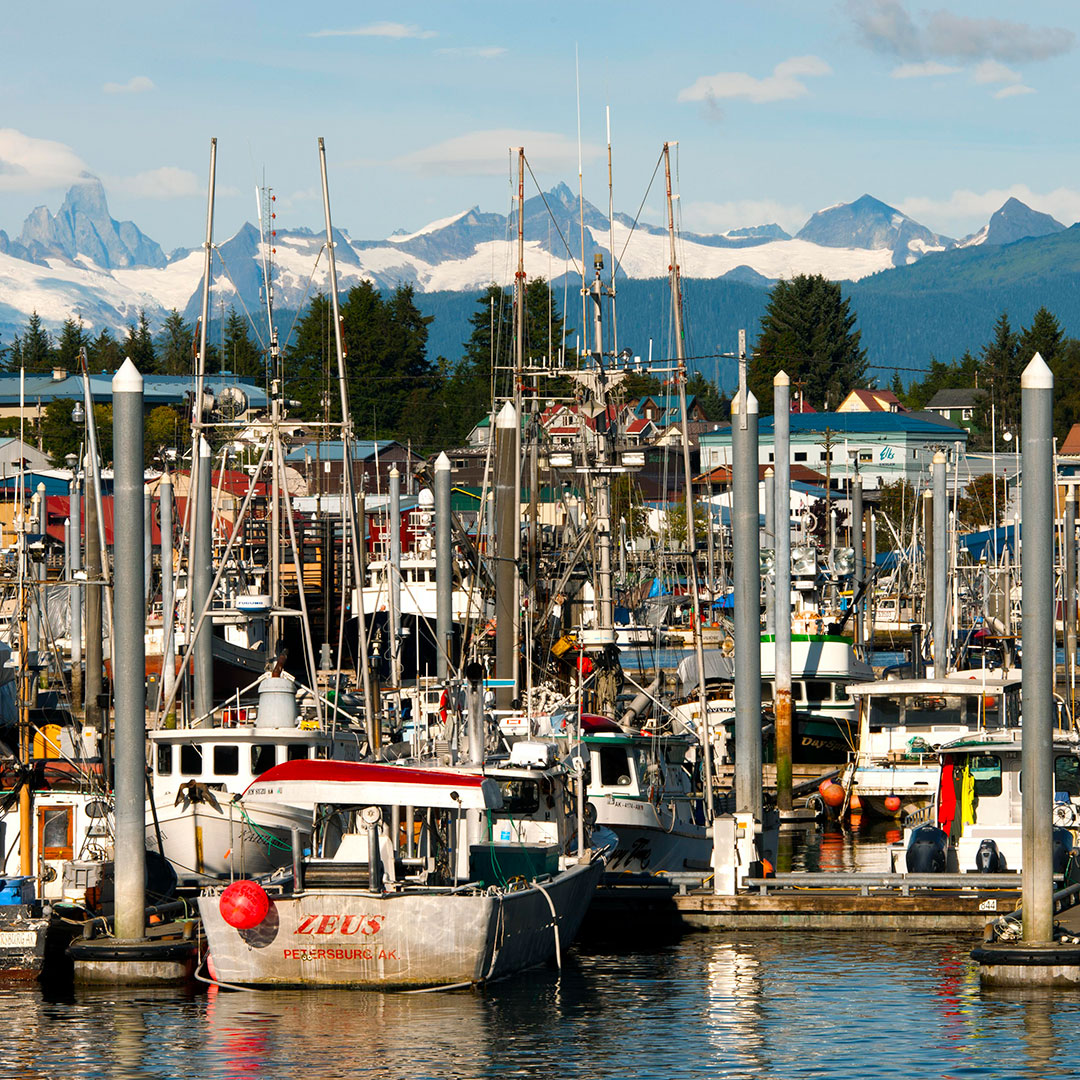 Another typical day in Alaska, beautiful clouds and weather. In the morning we sailed away from Petersburg, into the Wrangel Narrows, where we had the opportunity to see Steller sea lions, bunched in two buoys at the entrance to this very useful waterway, the short way to Seattle. Big ships cannot navigate it, as it is too narrow. It is also called Christmas Tree Alley, due to the big number of blinking red and green light navigational aids.

At the northernmost tip of Chichagof Island, Pt. Adolphus protrudes into Icy Strait—directly across from Glacier Bay National Park. The area is a striking setting for viewing one of the densest populations of feeding humpback whales in Alaska. The tidal currents around the point stir up the herring and krill upon which the whales, sea lions, seals, bald eagles and other marine animals feed.

Point Retreat Light is a lighthouse located on the Mansfield Peninsula at the northern tip of Admiralty Island in southeastern Alaska, United States. It provides aid in navigation through the Lynn Canal.

Pybus Bay is located on the southeast coast of Admiralty Island. The bay was named in 1889 by Lieutenant Commander H. B. Mansfield, U.S. Navy (USN); the name is derived from Point Pybus, which marks the northeast entrance to the bay. 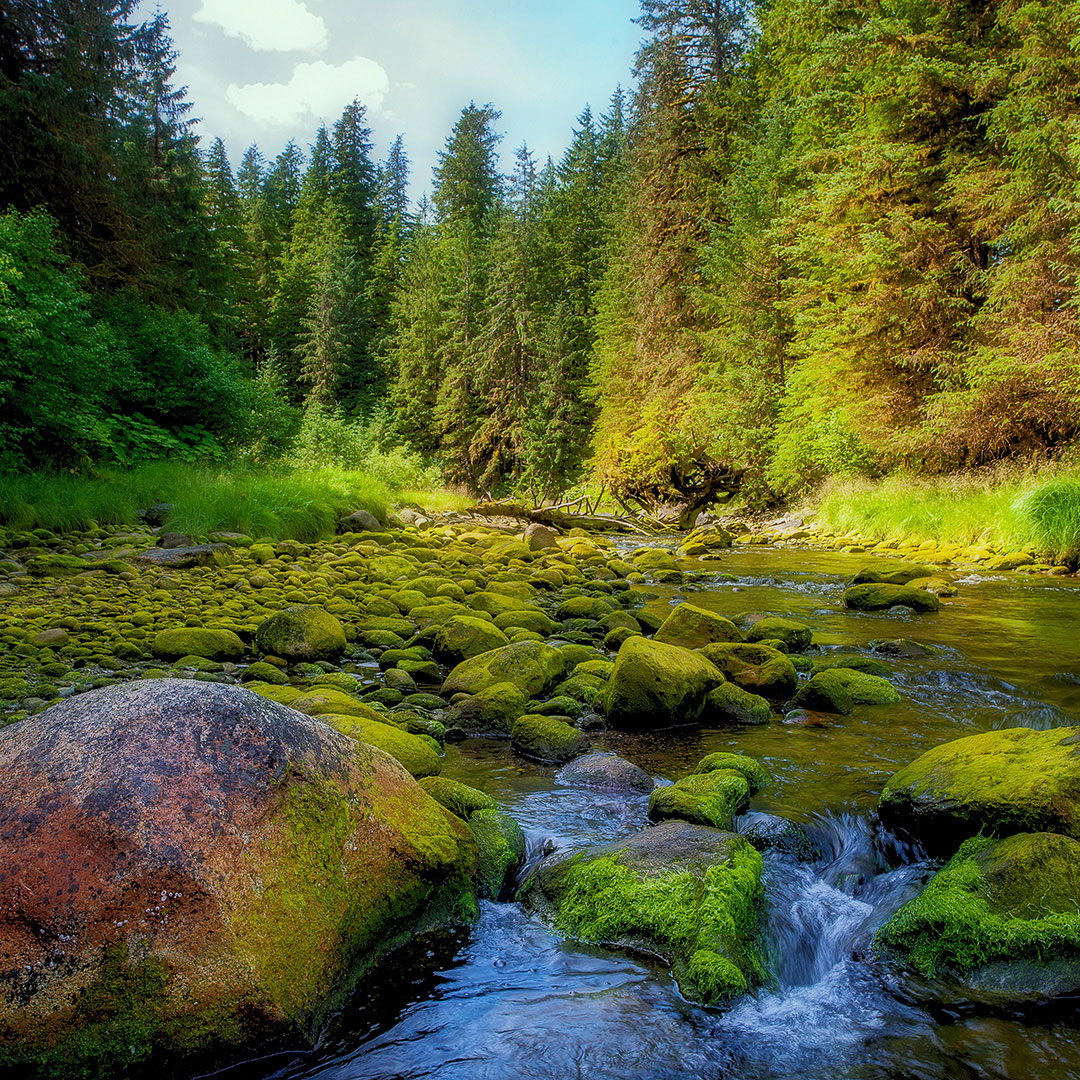 The Sumdum Mine is located 2.5 miles south of Sanford Cove. Two ledges constitute the Sumdum Chief and Bald Eagle Mines and "have been mined to a depth of several hundred feet below their surface outcrops." Supporting structures included a 10-stamp mill, 4 large Frue Vanners, 2 Pelton wheels, a wagon road, a short tramway, and a wharf. Gold was mined by the Portland Group from a silicious schist ore body containing gold-bearing pyrite, galena, and sphalerite.

Ready for a day at the beach? Sealion Cove on Kruzof Island offers more adventurous people an opportunity to hike to a remote sandy beach on the Gulf of Alaska. A 2.5-mile long trail starts at Kalinin Bay along a river estuary, and miles through forest and muskeg to Sealion Cove. A mile-long sandy beach on the open Pacific Coast at Sealion Cove allows for excellent beach combing, hiking, camping, and bird watching. Littered with driftwood and brilliantly colored seaweeds and shells, hikers spend hours combing the sand for treasures.

Security Bay is located on the north end of Kuiu Island facing Frederick Sound and Chatham Strait. It provides safe haven anchorage for vessels in an area of large open water. The nearest village is Kake, about twenty miles to the east. There are two private landowners within the park, and one historic native site in the park. 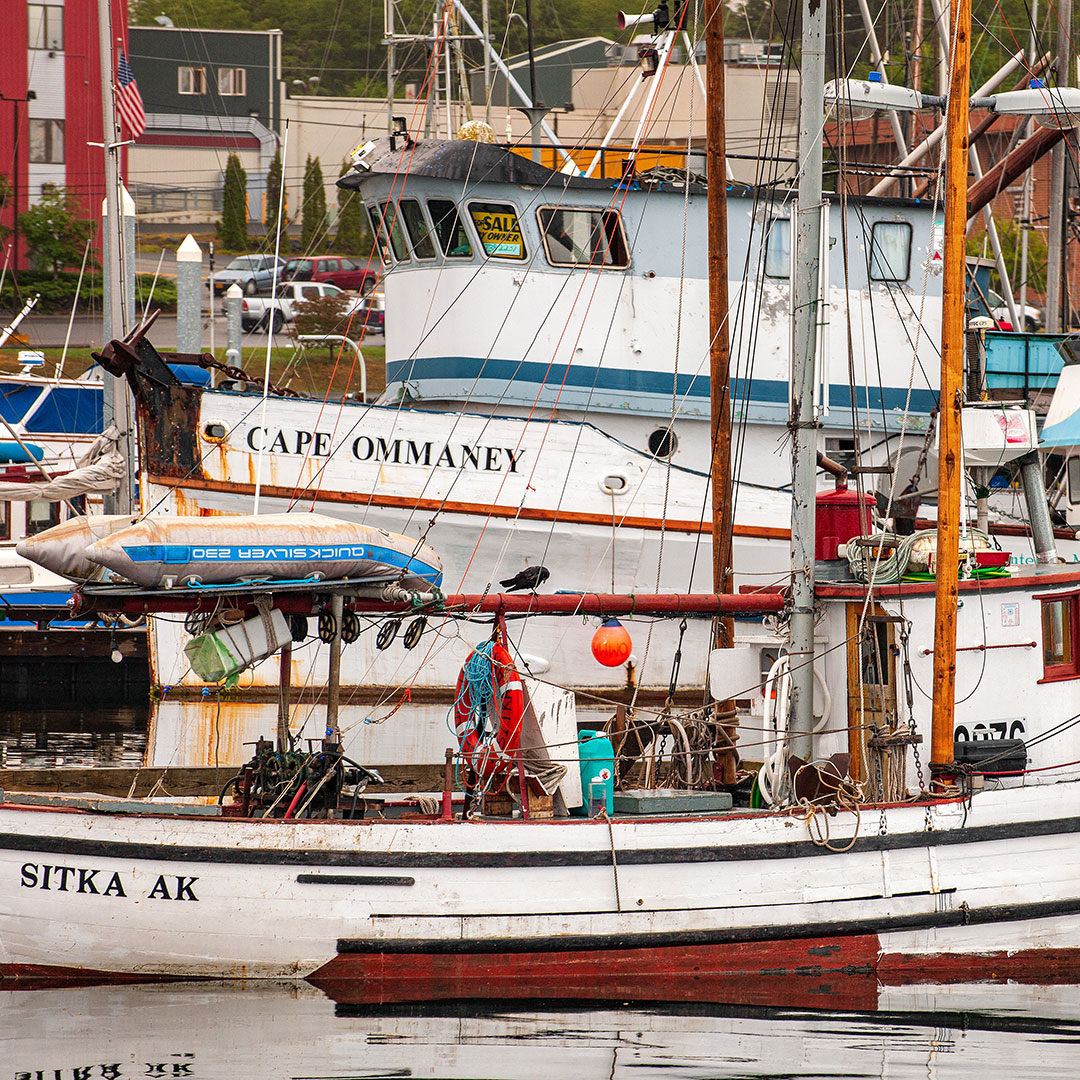 The Russians settled Old Sitka in 1799, calling it Fort Saint Michael. The governor of Russian America, Alexander Baranov, arrived under the auspices of the Russian-American Company, a colonial trading company chartered by Tsar Paul I. In June 1802, Tlingit warriors destroyed the original settlement, killing many of the Russians, with only a few managing to escape. Baranov was forced to levy 10,000 rubles in ransom for the safe return of the surviving settlers. Baranov returned to with a large force, including Yuri Lisyansky's ship Neva. The ship bombarded the Tlingit fort on August 20, 1804, but was not able to cause significant damage. The Russians then launched an attack on the fort and were repelled. However, after two days of bombardment, the Tlingit deserted the fort.

Stephens Passage runs between Admiralty Island to the west and the Alaska mainland and Douglas Island to the east. It is roughly 105 miles long. Stephens Passage was named in 1794 by George Vancouver, probably for Sir Philip Stephens. It was first charted the same year by Joseph Whidbey, master of HMS Discovery during Vancouver's 1791-95 expedition. 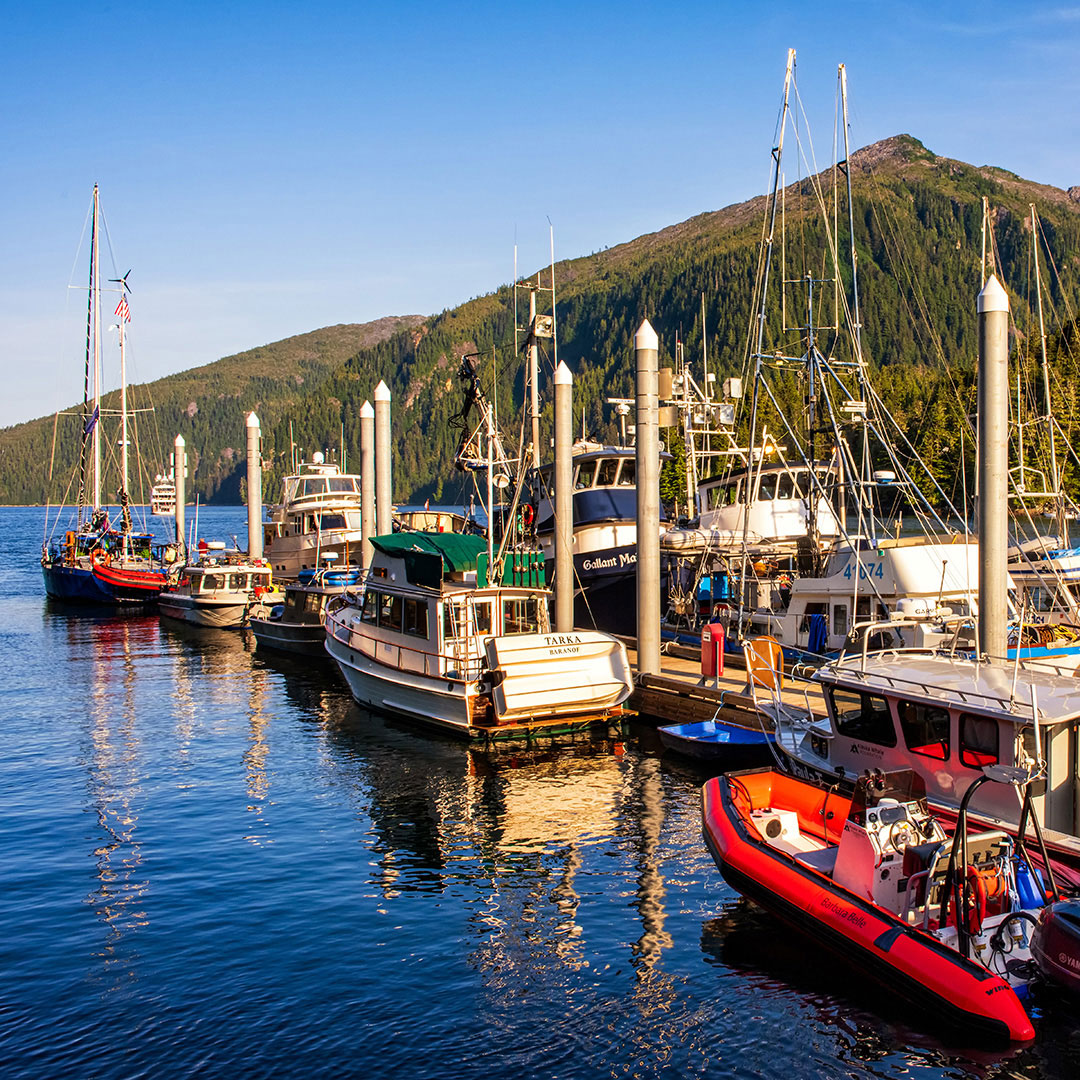 Taku Harbor is a natural, bowl shaped harbor that was once home to a major salmon cannery. The 700-acre marine park is located on the eastern shore of Stephens Passage, about 22 miles southeast of Juneau. Taku Harbor is frequently used as a night anchorage by commercial fishing boats and small tour ships. Taku Harbor offers lots of fishing and crabbing opportunities. 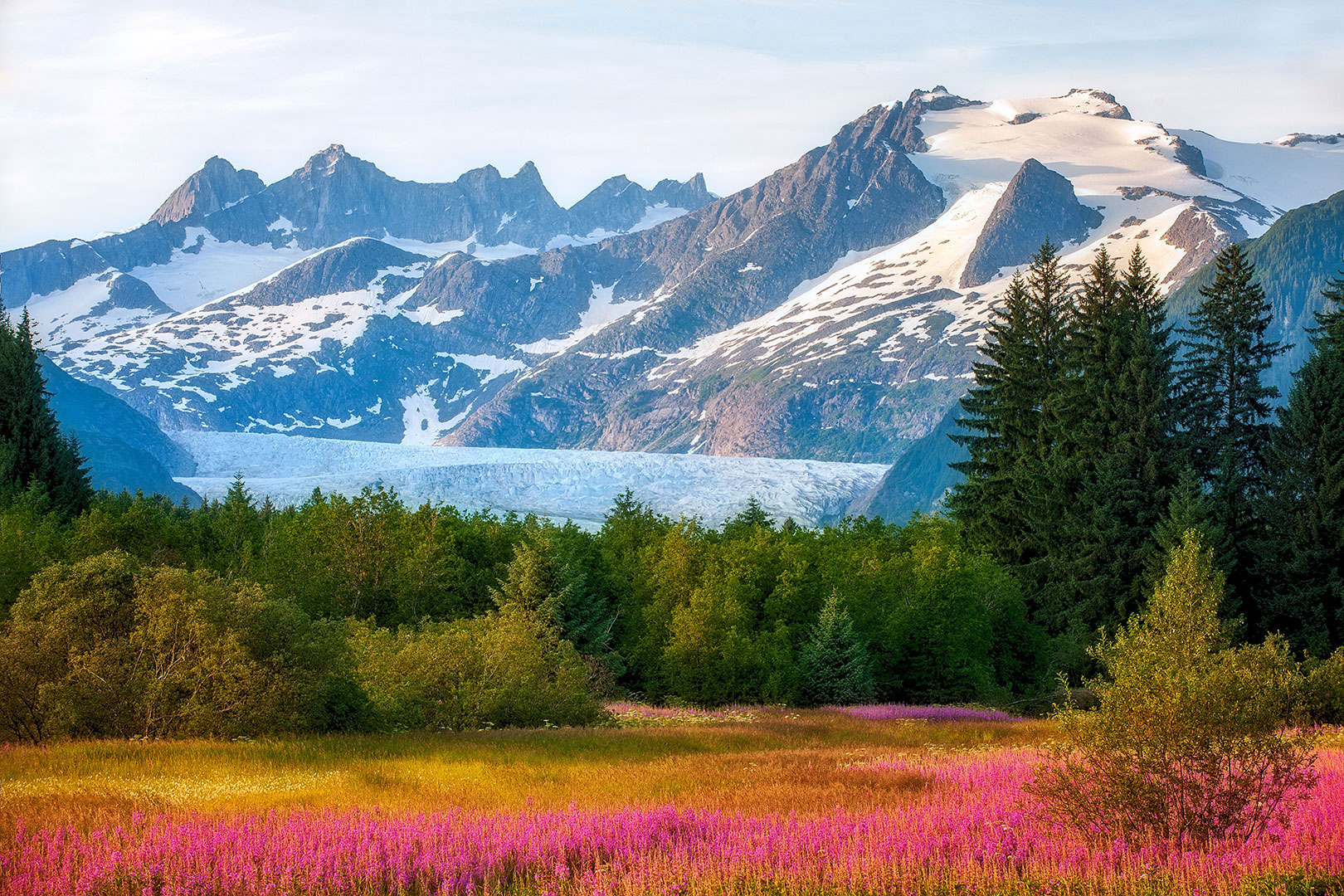