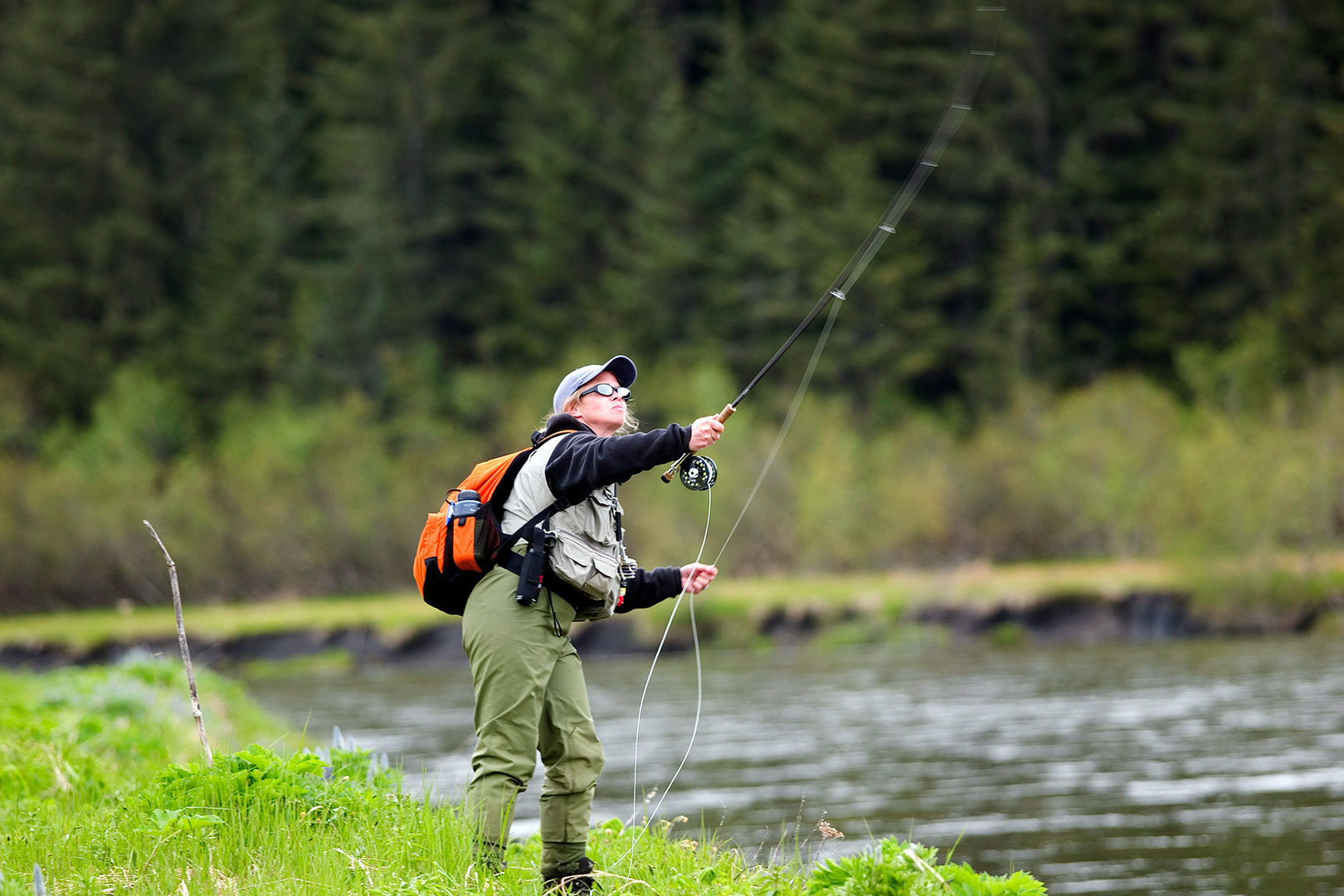 Our experienced guide will place you on excellent locations for Artic Char, Dolly Varden and Rainbow Trout.

The Arctic char is closely related to both salmon and lake trout and has many characteristics of both. The fish is highly variable in color, depending on the time of year and the lake's environmental conditions where it lives. Anglers have taken record-sized fish, known as iqaluk or tariungmiutaq in Inuktitut, in northern Canada. The flesh color can range from a bright red to pale pink.

Throughout their native and introduced ranges, cutthroat trout vary widely in size, coloration, and habitat selection. Their coloration can range from golden to gray to green on the back. Cutthroat trout can generally be distinguished from rainbow trout by the presence of basibranchial teeth at the base of the tongue and a maxillary that extends beyond the posterior edge of the eye. Depending on subspecies, strain, and habitat, most have distinctive red, pink, or orange linear marks along the underside of their mandibles in the lower folds of the gill plates. These markings are responsible for the common name "cutthroat," first given to the trout by outdoor writer Charles Hallock in an 1884 article in The American Angler.

The back and sides of Dolly Varden are olive green or muddy gray, shading to white on the belly. The body has scattered pale yellow or pinkish-yellow spots. There are no black spots or wavy lines on the body or fins. Small red spots are present on the lower sides. These are frequently indistinct. The fins are plain and unmarked except for a few light spots on the base of the caudal fin rays. S. malma is extremely similar in appearance to the bull trout (S. confluentus) and Arctic char (S. alpinus), so much so that they are sometimes referred to as "native char" without a distinction.

Rainbow and steelhead trout are the most widely known trout globally, and anglers highly prize them because of their strong fighting abilities. Freshwater resident rainbow trout usually inhabit and spawn in small to moderately large, well-oxygenated shallow rivers with gravel bottoms. They are native to the alluvial or freestone streams typical tributaries of the Pacific Basin but introduced rainbow trout have established wild, self-sustaining populations in other river types such as bedrock and spring creeks. Lake resident rainbow trout appear in moderately deep, calm lakes with adequate shallows and vegetation to support good food sources. Lake populations generally require access to gravelly bottomed streams to be self-sustaining.

Rainbow and steelhead trout are the most widely known trout in the world, and they are highly prized by anglers because of their strong fighting abilities. In Alaska, the two commonly recognized forms of the rainbow trout and their “forms” are based primarily on where they spend their time feeding and maturing. The most common rainbow trout in Alaska is the stream-resident form that lives its life entirely in freshwater with maybe short periods of time spent in estuarine or near-shore marine waters. The second form is commonly known as steelhead, and these trout leave freshwater as juveniles and migrate long distances in the ocean where they grow to maturity before migrating back to their original home waters.

The Pacific halibut is the world's largest flatfish. In July 2014, 76-year-old Jack McGuire caught a 482-pound Pacific halibut in Glacier Bay, Alaska. Halibut are dark brown on the top side, with an off-white underbelly and have very small scales invisible to the naked eye embedded in their skin. Halibut are symmetrical at birth with one eye on each side of the head. Then, about six months later, during larval metamorphosis one eye migrates to the other side of the head. The eyes are permanently set once the skull is fully ossified. At the same time, the stationary-eyed side darkens to match the top side, while the other side remains white. This color scheme disguises halibut from above (blending with the ocean floor) and from below (blending into the light from the sky) and is known as countershading.

The yelloweye rockfish is one of the biggest members of the genus. Its name derives from its coloration. It is locally known as "red snapper", not to be confused with the warm-water species that formally carries the name red snapper. The yelloweye is one of the world's longest-lived fish species, and can to live to a maximum of 114 to 120 years. As they grow older, they change in color, from reddish in youth, to bright orange in adulthood, to pale yellow in old age. Yelloweye live in rocky areas, and feed on small fish and other rockfish. They range from Baja California to Dutch Harbor in Alaska. Yelloweye rockfish are prized for their meat, and were declared overfished in 2002, and is subject to a rebuilding plan.

Salmon is the common name for several species of ray-finned fish. Other fish in the same family include trout, char, grayling and whitefish. Alaska has five species of salmon. They are native to tributaries of the Pacific Ocean. Salmon die after spawning, and their decomposing carcasses enrich the land and waters for future generations.

During their ocean phase, Coho salmon (Silver) have silver sides and dark-blue backs. During their spawning phase, their jaws and teeth become hooked. After entering fresh water, they develop bright-red sides, bluish-green heads and backs, dark bellies and dark spots on their backs. Sexually maturing fish develop a light-pink or rose shading along the belly, and the males may show a slight arching of the back. Mature adults have a pronounced red skin color with darker backs and occasionally reaching up to 36 pounds (16 kg). They also develop a large kype (hooked beak) during spawning. Mature females may be darker than males, with both showing a pronounced hook on the nose.

Sockeye salmon (Red) is sometimes called red or blueback salmon, due to its color. Sockeye are blue tinged with silver in color while living in the ocean. When they return to spawning grounds, their bodies become red and their heads turn green. Sockeye can be up 20 33 inches (84 cm) in length and weigh from up to 15.4 pounds (7.0kg). Two distinguishing features are their long, serrated gill rakers that range from 30 to 40 in number, and their lack of a spot on their tail or back.

The body of the Chum salmon (Dog) is deeper than most salmonid species. In common with other species found in the Pacific, the anal fin has 12 to 20 rays, compared with a maximum of 12 in European species. Chum have an ocean coloration of silvery blue green with some indistinct spotting in a darker shade, and a rather paler belly. When they move into fresh water the color changes to dark olive green and the belly color deepens. When adults are near spawning, they have purple blotchy streaks near the caudal peduncle, darker towards the tail. Spawning males typically grow an elongated snout or kype, their lower fins become tipped with white and they have enlarged teeth. Some researchers speculate these characteristics are used to compete for mates.

In the ocean, Pink salmon (Humpy) are bright silver fish. After returning to their spawning streams, their coloring changes to pale grey on the back with yellowish-white belly (although some turn an overall dull green color). As with all salmon, in addition to the dorsal fin, they also have an adipose fin. The fish is characterized by a white mouth with black gums, no teeth on the tongue, large oval-shaped black spots on the back, a v-shaped tail, and an anal fin with 13-17 soft rays. During their spawning migration, males develop a pronounced humped back, hence their nickname "humpies". The maximum recorded size for a Pink salmon was 30 inches (76 cm) and 15 pounds (6.8 kg).

The Dungeness crab inhabits bays, estuaries, and the near-shore coast of Alaska. Dungeness is named for a shallow, sandy bay inside Dungeness Spit on the south shore of the Straits of Juan de Fuca. It is widely distributed, from the Aleutian Islands to Magdalena Bay, Mexico. The Dungeness crab is a decapod related to shrimp, lobster, and other crabs. It has a broad, oval body covered by a hard chitinous shell, four pairs of walking legs, and a pair of claws. This species can be distinguished from other commercially important crabs (King Crab and Tanner crab) because its legs are much smaller and shorter concerning its body size. The dorsal surface of its carapace is smooth and spineless.

Spot Prawns (also known as Alaska Prawns) are a large shrimp found in the North Pacific. They range from the waters off Unalaska Island, Alaska, to San Diego. The commercial spot prawn industry is considered sustainable. Spot Prawns occur in sufficient numbers to support several small commercial and recreational fisheries. 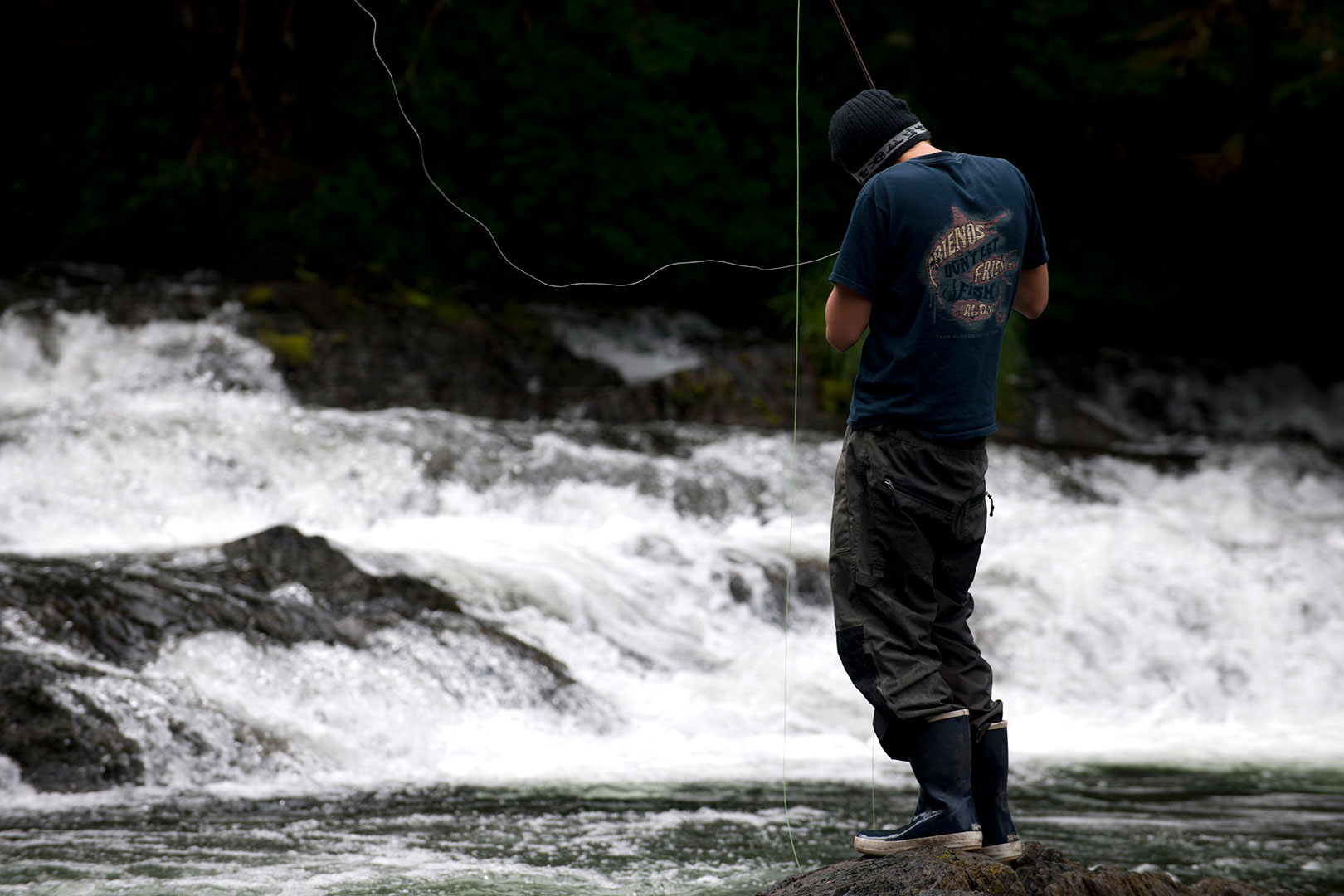 Our experienced guide will place you on excellent locations for Artic Char, Dolly Varden and Rainbow Trout.